So finally it rained in Bangalore

By sarthakganguly September 29, 2012
Last week onwards it has finally started raining in Bangalore, albeit intermittently and terribly late. But then again better late than never. One night it suddenly started raining. I was surfing the net and doing some silly stuff when suddenly my flat mate said that it was raining. I could of course hear it, but then I take some time to react to external stimulus when I am engrossed in some work. After about five minutes, nature forced the electricity out of our area and I was practically forced to watch the beauty of the rainfall. Not that I would regret it.

To be honest it was raining cats and dogs. Not literally, but yeah, after seeing Bangalore dry throughout the monsoon, seeing such a heavy downpour was really refreshing. When I just stood out of the door, the rain was in all its splendor. The place was all dark outside. The trees were all quenching their thirst. The roads were deserted. It was just the scene I wanted to see. In about five minutes the smell of the soil was all around. The mud, the shining roads, the glistening leaves, the accompanying storm, flashes of lighting and bolts of thunder - they were all there. I stood there for sometime, then sat on a railing for another ten minutes or si. After about half an hour or so my friends and I went inside, kept the door open, and sat in the floor mattress and chatted for some time. 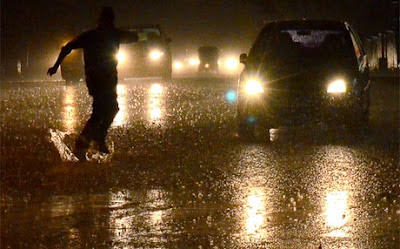 After that we went to sleep.
The world is so beautiful, it is not possible to just be mad at someone.