The media has been reporting massive Ukrainian victories and impending Russian defeat. The talks have also been cancelled, neither side could agree on the conditions and location. Russia has in the meantime put its nuclear arsenal on alert.

Below is however the frontline as it stands roughly. 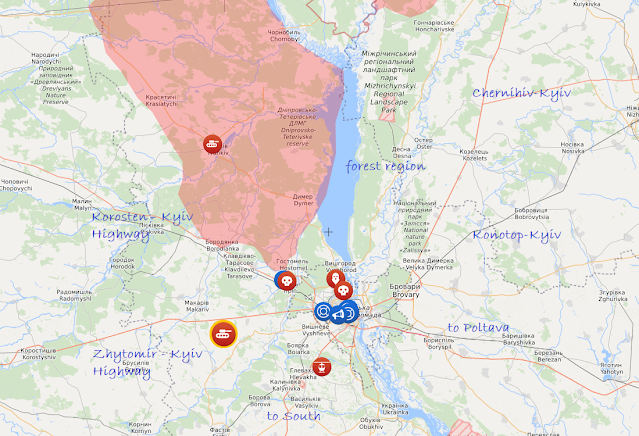 As we can see from the map, the situation is actually worsening for Ukraine and pretty quickly.

While the latest attacks on Kharkiv were beaten back and most of the city retaken by ZSU (Ukrainian Armed Forces), Kyiv is being encircled slowly but surely.

The North was the first to fall and rapidly. A direct assault to occupy the city failed yesterday, and it seems a further reinforced assault also failed to breach the city defences. In fact, some of the supply convoys were attacked further slowing the Russian advance.

However, if we look at the map, it is clear that the Russians are simply encircling the capital. The road to Korosten is in Russian hands, the road to Zhytomyr is being threatened and probably cut off. The road to Poltava is the only link left to the Donetsk region The highway to Konotop is held, but Konotop has fallen to the Russians. Only Chernihiv to the North East is still holding. The chance of it being further reinforced seems unlikely. It is clear that the forces are being actually withdrawn from the East to Kyiv to strengthen the defences.

This is what should be done, as I argued in the previous post. The eastern part is not defensible in any way - at least not for the long term. While the Russians have been slowed down, the evacuation of the threatened regions should have been done thoroughly. We don't see that happening much, yet.

The only open roads out of Kyiv are the one to Cherkassy along the river and to the Kherson front in the South.

If the Ukrainian Govt wishes to continue to exist and hold on to Kyiv, it must hold open at least a couple of roads to the West - preferably the roads to Korosten and Zhytomyr. Without these supply arteries, the city will starve and run out of food, supplies and ammunition rendering any meaningful defence impossible. 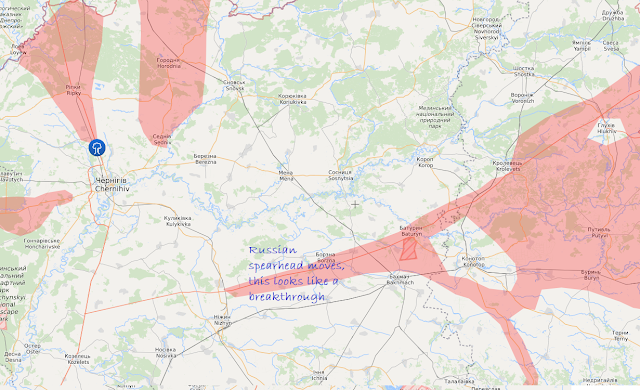 Chernihiv is getting rapidly surrounded. They have got only a single road going out of the city to Kyiv. The garrison has already fended off numerous Russian assaults and it is also being threatened by a mobile spearhead from the East. If it does not withdraw now, it might be encircled and eventually destroyed before it is able to mount an effective rear guard before Kyiv.

The Konotop garrison seems to have been encircled and mostly subdued. The Russian spearhead has already broken through the Ukrainian defences as I had feared before. If they reach the river Dnepr (and it seems they will), Kyiv will be cut off from the East almost entirely.

As expected, the Donetsk front remains largely static. There has not been a significant movement. If Ukraine has forces in this theater, this is probably their last chance to withdraw from this area now. The region is industrially rich, but if cut off, the local forces will be unable to render an organized defense of any sort.

Kherson city has beaten back the Russian assault. It seems the bridgeheads have also been reduced and bridges blow up. This is good for the city itself. The attempt to outflank it from the North had also failed. Melitopol had falled and there is a possibility of a link up with the Donetsk PR. But action in this eastern sector seems to be dying down. It appears that the Russians are reinforcing their forces for a concerted attack to cross the bridge further North and move straight to Dneprpetrovsk with a flank guard facing Kherson. If they will be able to sustain this logistically is to be seen.