Russian Armed Forces have continued their invasion of Ukraine over the past couple of days.

I will not go into detail comparing the tactical or operational situation. That requires a more serious study. Also, the information coming from the media sources is fairly limited and often contradictory - so drawing the proper conclusions is difficult.

However, the overall strategic situation is a lot clearer.

The image below shows the current frontline. The major problem is that such a solid frontline beyond these lines do not exist. There have been saboteurs who have been found operating significantly deeper inside Ukrainian territories. But these are roughly the lines where the major conventional forces stand. 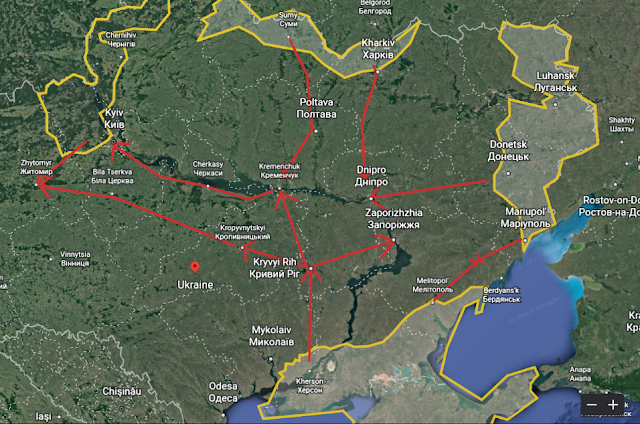 Ukrainian Mistakes before the invasion

There have been some failings from the Ukrainian Armed Forces before the beginning of the invasion. The Intelligence services were not aware of the exact date of the beginning of the invasion or that if the Russian Forces will actually cross the border. This was not too difficult to understand. Unofficial forays and recons in force to capture local officers may have yielded them more information and therefore time to prepare. If such information was available, they have not been taken seriously or the preparations had been largely inadequate.

Surprising though it may sound, Ukrainian Govt and High Command were under the mistaken belief that NATO and the European Union will be able to provide direct military support against any Russian aggression. This deterrence probably played a significant role in convincing the Ukraine Govt that the issue will not escalate into an all out war.

There are two issues though. Even if you can't fault them for the West betraying them, Ukraine did know a couple of things - Russia was building up for a long time on their frontiers and this was detected. Also, the fact the the NATO or the European Union's lack of military readiness was also well known. So even if they had wanted to, it was doubtful if the other European forces would be able to defend Ukraine with their forces.

Also, considering the recent withdrawal of American troops from Afghanistan under the Biden administration, there was little chance of any new deployment in Ukraine against Russia.

The majority of Ukrainian Forces had been deployed to the South and East facing the new separatist republics. However, it is now clear that the Russian threat from Donetsk and Luhansk has been limited. The main attack came from the South (via Crimea) and North (from Belarus). It was thanks to the mobile troops in the Kiev region that the area around the city has been secured. Chernobyl fell almost without resistance.

Of course, the issue is that Ukraine is almost entirely surrounded by Russia - with Belarus (a Russian puppet state) to the North, Russia and the puppet states in the East, Crimea to the South and Transnistrea to the South West. Ukraine's terrain is also pretty bad for defense. You have got these flat steppes that are almost impossible to defend against a motorized militarily and numerically superior force.

It is clear that all of Ukraine cannot be defended with the forces it has at its disposal, even with the mobilization of its reservists. The problem is that the East, while more industrialized and vital to the economy, cannot be defended for long. Their forces are likely to be encircled and defeated in detail.

Ukraine will find it hard to evacuate any territory quickly either, because Russia will simply setup puppet Republics in the provinces and annex them later.

However, to survive, Ukraine will have to sacrifice its limbs. This is a hard choice to make but militarily there does not seem to be any other option. As a saving grace, Ukraine can consider defending the provincial capitals to prevent Russia from completely claiming puppet states. This means setting up Fortress Towns in Kharkiv, Dneperpetrovsk, Mariopol etc. However, this takes a lot of time - setting up of static defences, reserves, stocks for at least a month or more, evacuation of civilians and so on. Now that a state of war already exists, it is probably too late anyway.

Russia fears the presence of NATO on their very frontiers. This explains the anxiety of the Russian Govt in general and Putin in particular. Though it does not justify the invasion, it does explain it. The immediate objective of Putin (assuming he is rational) is that he would like to setup a puppet Ukrainian govt like the one that exists in Belarus and Crimea. A buffer state between Russia and NATO/EU is perhaps what Russia is looking for.

Here is what we have observed so far -

The Russian plans were not fulfilled entirely.
While the International powers acted as expected, Ukraine did not.
The Ukrainian Armed Forces did not surrender quickly, nor did they desert their positions in hordes as hoped (by the Russians). The Government led by President Zelensky also did not flee the capital in the hour of danger. There was no rout.
Russia may have had a large force on Ukraine's borders, but the forces they had unleashed against the Ukrainian fronts seem to be less than adequate. Of course, they are likely to reinforce their positions. However, how much Ukraine will be able to match up to Russian reinforcements need to be seen in the future.

The Southern Front is broken. The forces in Melitopol and Mariopol are about to be encircled as well. Even though Kiev holds and has defeated the latest Russian forays, we need to understand that it was a minor attack (with a single tank brigade).
Ukrainian forces are fighting valiantly, however, the overall situation does not look good.
If the Kherson front (South) is not held, the massive Dnepropetrovsk region will fall eventually. This will take away much of what remains of Ukraine's industrial infrastructure and power. So a battle of attrition will no longer be possible. The East of the river Dneipr cannot be militarily held for much longer.
The ideal situation for Ukraine would be this -