Ukraine seems to be hell bent on fighting a static war without almost any flexibility. Their forces may be valiant and defiant, but without a coherent strategy, the best they can hope for is to prolong their own suffering WITHOUT significantly hurting the enemy. 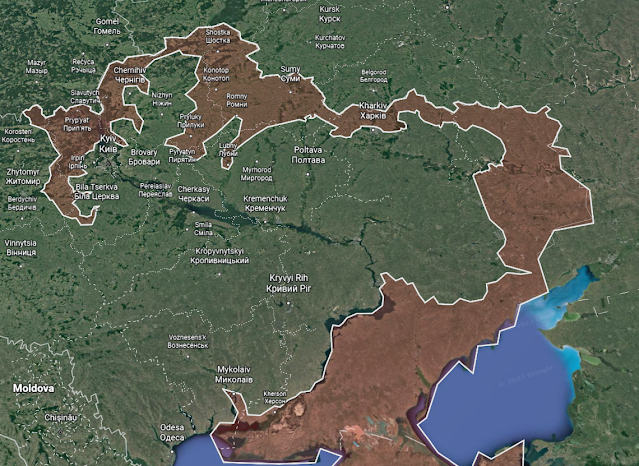 Here is how the situation stands as of now.

Kherson has fallen. The front in the South was decisively broken day before yesterday with the capture of the railway station and port. Naturally, the Russian forces did not wait and moved straight North to Mykolaiv. All UA forces on the Dnepr facing South are likely to be outflanked. Unless the Russian spearheads are cut off and destroyed in a day or two, it will be too late. The fall of the entire South seems to be inevitable.

To extricate the forces, UA should have withdrawn forces from other sectors (including far away Donetsk front). Now, the best they can try is to win time to reinforce Kyiv.

Kharkov is almost surrounded. This battle seems to be fought by the UA only for prestige reasons. The Russians are content with only bombing the approaches to the city and tying up the significant Kharkiv garrison. There are local mobile forces as well - they seem to be wasting their time fighting a static battle of attrition, while they should have been deployed to the Mariopol region to prevent the Russians from Crimea and Donetsk linking up or preventing them turning around the Dnepr bend.

Chernihiv is besieged. Another garrison will probably perish in the city, again fighting a battle that is not even remote decisive.

Fastiv is almost in Russian hands. Kyiv is getting steadily encircled. Zaporozhe is almost encircled as well. Melitopol has fallen. Mariopol is almost taken. Mykolaiv is partially taken.

Even though many are delighted to see the UA defense putting up a good fight against the Russian forces, it needs to be established that the defenses in both the North and South have been completely broken.

There is almost no regular frontline remaining in most of the country. What remains are isolated garrisons and cities that continue to resist. Unfortunately, Ukraine does not have the strategic depth that Russia has - these fortress defense concepts will not prevent Russia from overrunning most of the country - nor will it seriously impede the supply problems.
Unless the UA shortens its lines right now, we can expect a cohesive national defense to break down into city based battles. Bloody they may be - its outcome shall not be in any doubt.